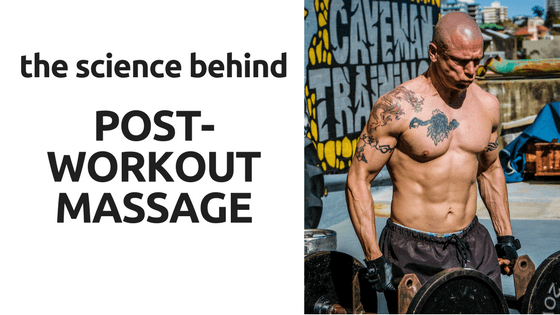 While many people think of massage as just a feel-good sort of luxury, there are actually numerous health benefits, one of the many being post-workout recovery. Massage therapy has long been used as a recovery method for athletes, but there was little science to support it. While many athletes have known for years that massage can help to reduce soreness after an intense workout, science is suggesting there’s much more to it than just making us feel better.

Over the last several years, as more studies have been done in the field of massage, the reasons are becoming more and more clear.

Muscle damage from exercise isn’t just relayed to us through pain, but also through subtle clues that may be hard to detect for many people. Through certain testing, researchers were looking to see when an athlete’s muscles were truly ready to return to activity, and how massage affected that. So, in a 2015 study¹, they wanted to see if massage could increase post-workout strength and body awareness (proprioception). To do this they focused their testing on the gastrocnemius (the large muscle of the calf). Each participant ran up and down a 5 story building twenty times. Following this, half the subjects received a 15-minute massage to the lower legs and the other half did not. What they found was that the subjects who received massage had more strength and improved proprioception and muscular architecture. While massage isn’t going to replace lifting weights, the return of strength and the expression of strength and technique is increased when massage is applied directly following an intense workout; all of this to say, that means you’ll not only feel better quicker, but you can also get back into the action much sooner.

Another study² gives a bit more explanation to this as they discovered that massage decreased the activity of a protein called NF-kB, which causes exercise-related inflammation, and increased the activity of a protein called PGC-1alpha, which spurs the production of new mitochondria. What does all that mean? Basically, on a cellular level, massage is decreasing inflammation and increasing cellular repair after exercise. Again, suggesting that massage doesn’t just make you feel better after a workout, but truly helps your body repair itself much faster.

Notice that none of this had to do with lactic acid! In fact, these and other studies have shown that massage does not “flush out” lactic acid at all; a misguided reason was often given for post-workout massage. Instead, the reason you feel better is that massage is causing structural and cellular changes to the muscles, speeding recovery and rehabilitation.

So, if you love to push yourself at the gym, be sure a schedule your next massage right after to get the most benefit!

3 Stretches to loosen hips in less than 5 minutes.

What is Deep Tissue Massage