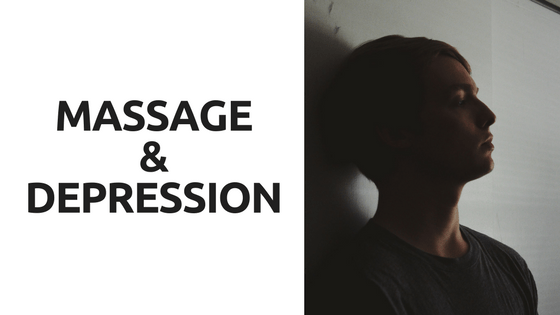 Depression is an all-too-common struggle for people all over the globe. According to the World Health Organization, it’s estimated that 350 million people suffer from depression. While there are many treatment options, one you may not have thought of is massage therapy. Massage can decrease muscle tension and ease some of the daily physical stress you may put on your body, but it can also go beyond just making you feel good.

A study from the Touch Research Institute at the University of Miami School of Medicine¹ found that massage decreases the stress hormone cortisol by an average of 31%. There has been a long-standing association between high cortisol or impaired regulation of cortisol levels and anxiety and depression. Decreasing cortisol and aiding the continued regulation of this hormone can potentially ease some of the symptoms of depression.

This same study also concluded that massage increases the levels of two very important feel-good neurotransmitters, serotonin, and dopamine, by 28% and 31% respectively. Both of these neurotransmitters play an important role in mood regulation.

Along with these measurable changes within the body, there are also benefits that aren’t so measurable. One of the biggest is the mind-body connection that is enhanced when massage therapy becomes a regular part of your self-care routine. When the brain and nervous system can take the time to calm down, receive plenty of oxygen during the deep breathing a massage can induce, and relish in the sensations associated with the massage – the way the pressure feels as the hands move from one muscle group to another; the pull of a good stretch; the release as a muscle finally let’s go – all of these stimulate the brain to perceive the sensations of the body differently, and in a more positive way.

Massage therapy also creates a safe space for positive touch. Touch is a necessary part of being the social creatures we are as humans. A lack of touch can actually have very harsh effects on us, physically and emotionally, but many people have experienced touch in a very negative way, and avoid it as much as possible. However, taking 60 or 90 minutes once a week or once a month to allow yourself to receive positive, safe touch that you may otherwise not receive, can help ease those feelings of discomfort, loneliness, and depression. One study² found that massage therapy supported a significant improvement of the psychological and physical well-being of sexual abuse survivors.

So while massage may not be a cure for depression, and it’s not a substitute for medications or therapy, it can play a major role as part of a holistic approach to the treatment of depression.

Is Sports Massage Right For You?

What is Deep Tissue Massage